The first time I hear the derogatory term “gusano” (worm) to refer to Cuban Americans is in 1975 during my freshman year at Amherst College. It is created by the Castro regime as a propaganda tool; refers to (and is solely meant to) discredit the entire group of Cubans living outside of the island; created to discourage collaboration and communication between Cubans on the island and off the island and created in order to make two sides of an ethnic group become enemies, instead of family, based on their geography. I never live in fear of being in the United States during my 58 years but I am concerned now. I feel the country is exploding with the Donald Trump juggernaut imperiously headed for the Super Tuesday Primaries while Marco Rubio and Ted Cruz continue to destroy each other (plus US as Latinos in the United States.) And there is nowhere to run to or nowhere to hide while the specter of political assassinations weigh heavily on my mind. A new civil war is on the horizon should this occur and I am at an age where people like me will be the first to be either put in an internment camp or liquidated.

Back Story:
At the recent gathering in Nevada of Democratic Hispanic leaders, ahead of the GOP debate in Las Vegas, photos of Cruz and Rubio were plastered alongside Trump’s picture, as all three were criticized as anti-Latino. A press release noted, “While Trump continues to grab headlines with his hateful anti-Latino, anti-immigrant language, the positions and records of the two Latino presidential candidates in the race are equally dangerous.”

Dolores Huerta, an influential labor leader and civil rights activist, has called Cruz and Rubio “sellouts” and “traitors” at the gathering and said the Hispanic candidates are turning their backs on the Latino community. Partisan politics aside, the question remains: Are Cruz and Rubio ‘traitors’ to Latinos or do they just have different views?
Latino USA asked several noted Latino politics observers. Here is what they told them:

Esther Cepeda, Nationally syndicated columnist, The Washington Post Writers Group “It’s true that all’s fair in love, war and politics so from a tactical perspective trashing Latino politicians on policy makes sense. However, in a time when so many others are demonizing Hispanics, it’s disconcerting to see our own ripped apart on the basis of their fealty to an amorphous idea of what Latino identity should be. Cruz and Rubio’s politics and policies are fair game, criticize away. But it denigrates all Latinos when some of us decide to become arbiters of what is or is not “truly” Latino. We spend a lot of time telling people outside the Hispanic community to understand that we are not monolithic – we should follow our own advice.”

Stephen A. Nuño, NBCNews.com contributor and Associate Professor, Department of Politics and International Affairs, Northern Arizona University “The truth is that Latinos have great potential to contribute to all sides of the political ledger if only those in the GOP would see the greater long-term opportunity in expanding the party message rather than consolidating it with white voters. I think Latino organizations, both conservative and liberal, are right to challenge Cruz and Rubio on their policies, but to suggest that one’s loyalty to identity rest on certain leaders’ assertion of a political test, and to cast accusations of ‘traitor’ should they not pass that test, is no less fascist and dogmatic as the Trump crowd.

Pilar Marrero, Senior Political Reporter, La Opinión “Even before all of this activism and partisan campaigning started pointing fingers at Cruz and Rubio, we wrote a couple of stories about the inconsistencies between these two politicians life stories or family stories and their positions on immigration and other issues of interest to most of the Latino voters in this country. We should hold politicians accountable, and not just the Republicans, the Democrats too. All of them. But if these two are going to be a “threat” to democrats by peeling off latino voters, they have a lot of work to do. I am not convinced either of them is a threat at this time. First, there´s an issue of the Republican brand, which is seriously damaged among Latinos and getting worse thanks to continuous demagoguery on immigration and race. Then, there´s the fact that most Latino immigrants in this country are Mexican and these two are Cuban. And Mexicans know that Cubans, even today, still have a privileged immigration status that basically offers legal residency and public assistance as soon as they set foot in the country or come to the border to request refuge status.”

Albert Morales, Director of Latino Engagement, Democratic National Committee “Ted Cruz and Marco Rubio are both using extreme rhetoric and backward-looking policies that would be harmful to every American, including Hispanics, by dragging us back to the economic policies that were in place on the way to losing 8 million jobs, to seeing foreclosure signs paper streets all across America, and when hard working and middle class Americans of all backgrounds had to choose between bankruptcy and getting the health care they needed. That both of these candidates are the children of economic and political refugees from Cuba only makes the tone of their campaigns and their tax-cuts for the wealthy economic policies that much more offensive.”

Rocker Roller Rican “Salsa The Untold Story” Achieves 18,967 Downloads from The Cloud while Video On Demand Release On Google Plus seen by 2,258 Viewers.

Salsa Magazine’s Administrators have divied up storage of the “Rocker Roller Documentary” (featuring “Salsa The Untold Story”) on the Top 10 Cloud Storage Services to internationally distribute the film by forwarding the download link to 857 Latino Student Unions, 127 Cultural Centers, and 194 University Multicultural Departments plus 30 US Latino Television Affiliate Stations.
1. Just Cloud
2. Live Drive
3. Crashplan
4. Zip Cloud
5. Sugar Sync
6. SOS
7. Dropbox
8. Carbonite
9. Hightail
10. MOZY
With the introduction of cloud storage and cloud servers, it has become easier than ever to backup all important video files online. You are now given the flexibility of accessing all your files from anywhere in the world, with the benefit of knowing that all your important pictures, videos, music, files, documents, as well as other programs and data are securely stored and available to you 24 hours a day 7 days a week.

Very Grateful for acceptance of my work in Bowling Green and archiving of Sentinel Tribune Newspaper Articles by Arts and Entertainment Editor-Reporter David Dupont. Archive of all previous articles (7) Thanks! El Extreme Luis Chaluisan http://www.sent-trib.com/search/?t=article&q=luis+chaluisan — with Maria Hernandez and L.f. Chaluisan Batlle at Sentinel-Tribune. 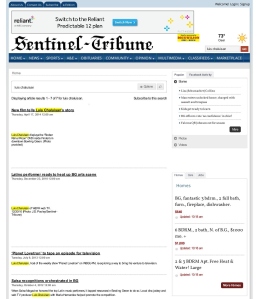 Will history repeat itself. An interview with Joe Bataan and Michael Ruker.

From L.f. Chaluisan Batlle Editor Salsa Magazine
“With all due respect to Joe Bataan (who has been successful in keeping his brand alive with his West Coast following) the current Fania Record’s leadership and legal team haven’t got a clue how to relaunch the label as a viable source of alternative Latin culture. In the first place, utilizing contemporary DJ remixes of classic material instead of nurturing reasonably priced live music presentations by current Latin Tinged orchestras is delusional. In the second place, abandoning individuals like Mr Salsa Izzy Sanabria who knew how to market Salsa via publishing, television and artwork is self defeating. And in the third place, the backroom politics of Larry Harlow and his crew of non-Latino industry thugs to make it seem that it is Harlow who pushes Salsa into it’s Golden Age of productivity is the ultimate insult to all Latino musicians/supporters who create the genre.”
“This Is Gone Forever”
Meanwhile in the Bronx, things haven’t been working very well for Mike Amadeo, owner of the famed Casa Amadeo salsa record store. The store has been in continuous operation since 1941. But it might not last much longer.
“Business is lousy,” says Amadeo. “Nobody in the music business is going to tell me after 64 years in the music business that this is going to be like it was before. It will never happen again, this is gone forever.”
Amadeo says that in Fania’s heyday, records flew off the shelves—he made $7 thousand dollars a week, more than three times what he takes in today. He says there used to be over a hundred ballrooms with live bands in the Bronx alone. Today, not one is left. And if you ask him about the new Fania owners—let’s just say he’s not pleased.
“Let them buy an American record company, for the English speaking people that know what the hell they doing. They don’t know what the hell they doing,” says Amadeo.
Amadeo was once a shot-caller in the salsa industry, back when everybody involved were friends and extended family from the barrio. He and other old-timers say they feel neglected by the new Fania. Amadeo, for example, says the new owners never once called him up to try to learn from his decades of experience selling music to the community. He says the stuff they are putting out doesn’t make sense.
“What Fania is doing right now is killing the industry. The few people that are left that go to the stores to buy records, they want the original recordings as they came out,” says Amadeo.
Reinvent, or Die
The new Fania isn’t particularly interested in reaching the people that go to the stores to buy records. For Michael Rucker at Fania, there’s a different audience in mind.
“Now we look forward and we say – how do we take this to a younger audience today,” says Rucker. “Because at the end of the day, if you aren’t reinventing, if you’re not going to find new listeners then ultimately you die. And that’s exactly what we don’t want to happen.”
In an attempt to reach younger audiences, Fania is has been working with DJs and putting out remix albums that sample their catalog. For some members of the salsa community like Mike Amadeo, this amounts to sacrilege—a watering down of a rich musical history. But Joe Bataan, for one, isn’t so sure.
“If you sit on history, it dies. So you got to lift yourself from your seat, let history breath, and pass it on, and then you’ll have a chance with the music,” says Bataan.
It’s unclear whether the new Fania will succeed in reaching the youth — the label won’t share sales numbers, so we don’t know how well they are actually doing. But, says Bataan, at least they are trying, and giving the next generation a chance to decide what Fania means to them.

Michael Ruker and the Fania/ Codigo people are working to revive the Fania label and mystique. Only time will tell. http://latinousa.org/2014/08/15/fania-records-fifty-years-sabor/

Luis Chaluisan Salsa Magazine If you tell the truth, you don’t have to remember anything. 7,094 members (40 new)https://www.facebook.com/groups/salsamagazine/

— with Maria Hernandez and 5 others at WEPAwebTV – New Edge Theater.

El Extreme Luis Chaluisan Salsa Magazine 7,016 members (33 new): All great beginnings start in the dark, when the moon greets you to a new day at midnight https://www.facebook.com/groups/salsamagazine/

luischaluisanblog
Create a free website or blog at WordPress.com.